Connectivity and the strong drive for 5G technology are key to achieving a more sustainable and inclusive digital transformation in Spain, highlighted Roberto Sánchez, Secretary of State for Telecommunications and Digital Infrastructures, during the fourth edition of the 5G Forum, which was held these last three days, virtually like last year. During the 5G Forum, numerous use cases of 5G applications that are being carried out in multiple sectors of industry, agriculture, tourism or surveillance, among others, which are those that should create value for the new 5G networks and make the entire ecosystem profitable.

Connectivity is the essential vehicle for the digitization of Spain, because without connectivity there is no possible digital transformation. Even before the pandemic, 5G technology and connectivity was one of the top priorities of the Secretary of State for Telecommunications, said Roberto Sánchez at the opening of the 5G Forum. In the last three years, an extraordinary boost has been given to the extension of the broadband network in Spain and now, until 2026, 5G will be promoted with the Strategy to promote 5G technology within the Spain Digital Agenda 2025, approved by the Government at the beginning of the year.

For the Secretary of State, the pandemic has revealed the importance of digital transformation on the social agenda. Many teleworking activities, tele-education, social activity through videoconferencing, leisure or entertainment have been able to keep up with the pandemic thanks, precisely, to the existence of broadband networks. At the same time, however, the existing digital gaps in Spain in terms of quality connections have become apparent. Therefore, he stressed, it is urgent to resolve these existing gaps both between individuals and between companies.

“We want 5G to be seen not only as part of the telecommunications industry but as an instrument for the economic development of many other sectors,” said the Secretary of State for Telecommunications.

“In this urgency of social and digital transformation, 5G technology is a key piece,” acknowledged Roberto Sánchez. 5G technology is also linked to cloud services and artificial intelligence, the combination of which is enormously reinforcing. 5G is very disruptive for the economy as a whole and not only in terms of personal communications, which was already carried out with 4G, but also in the field of economic activity, care, provision of services, production of goods or agriculture, among others. “It is difficult to pin down what the key applications of 5G technology will be, but we know that they will affect our lives,” he stressed.

Thanks to the Recovery, Transformation and Resilience Plan that Spain has presented to the European Commission, our country will have a significant financial endowment to carry out these transformations in which 5G will play a predominant role, added Sánchez. Of the 140,000 million euros that Spain will receive in transfers and credits during the period 2021-2026, of which 70,000 million will be received between 2021 and 2023, 4,000 million will be allocated to the 5G Roadmap.

Of those 4,000 million euros, about 2,000 million will be destined to extend connectivity in Spain, with the aim of ensuring that the entire population has a connection of at least 100 Mbit / s; about 1,500 million will be dedicated to the development of 5G with measures such as the extension of new networks and R & D & i actions; and another 500 million will go to aspects related to cybersecurity, of which a specific plan will be approved shortly, added the Secretary of State. 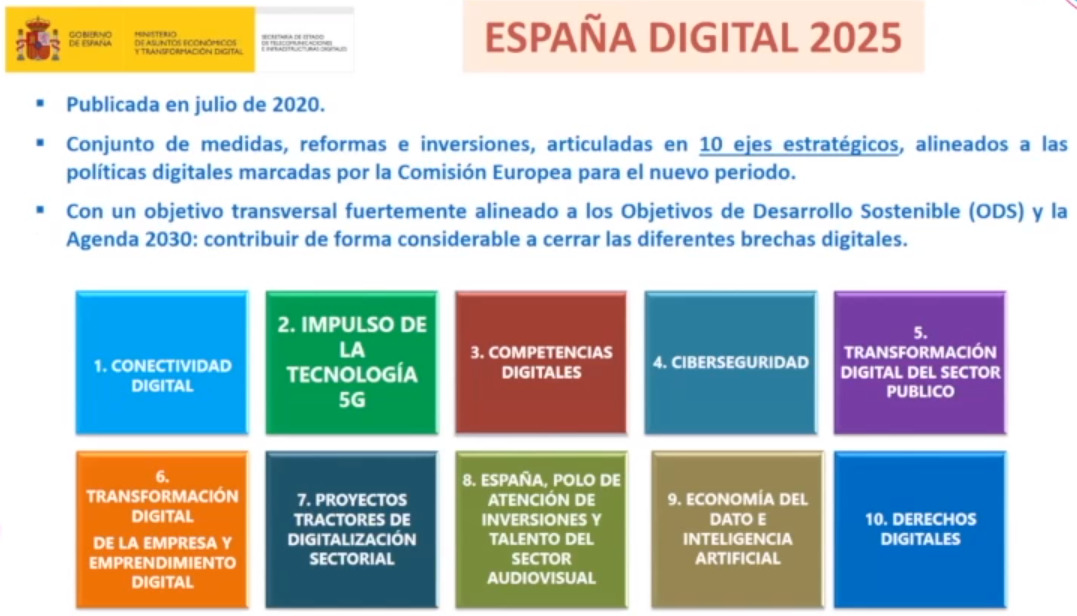 The promotion of 5G technology will focus on three lines of action: the award of the 3.5 GHz band, a process already completed, and the reorganization of the spectrum so that all operators have contiguous bands, which will be done shortly; the auction of the 700 MHz band, which is expected to start this month of May; and the reallocation of the 26 GHz millimeter band, in which the Government is already working and studying requests from the sector. Roberto Sánchez recalled that the Council of Ministers approved a few days ago an extension from 20 to 40 years of the term of future radio spectrum concessions, which will give telecommunications operators greater confidence when it comes to deploying networks and making them profitable. 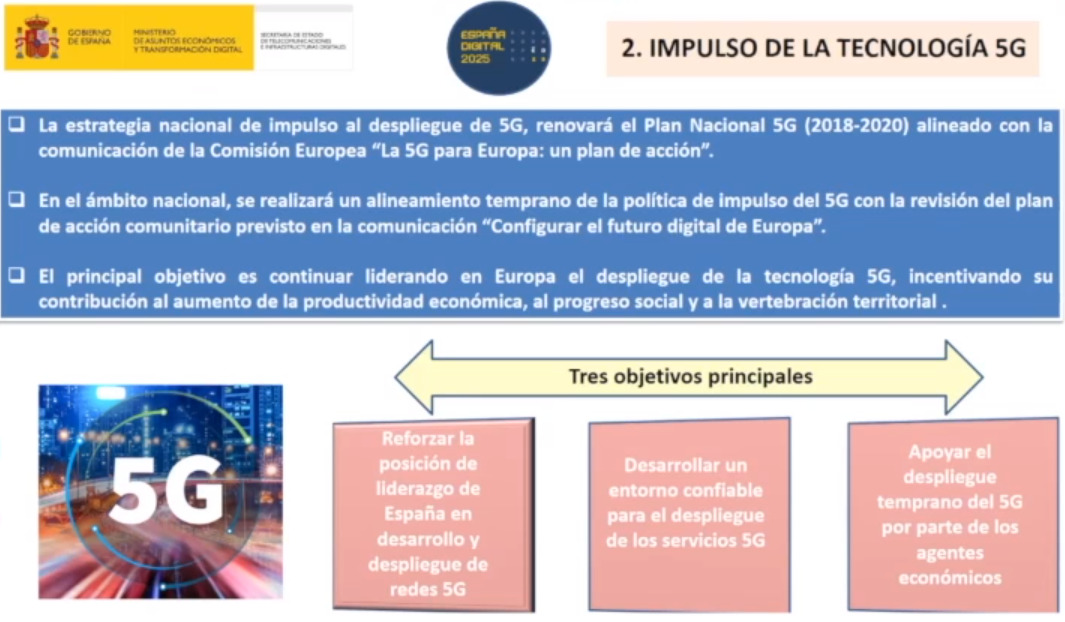 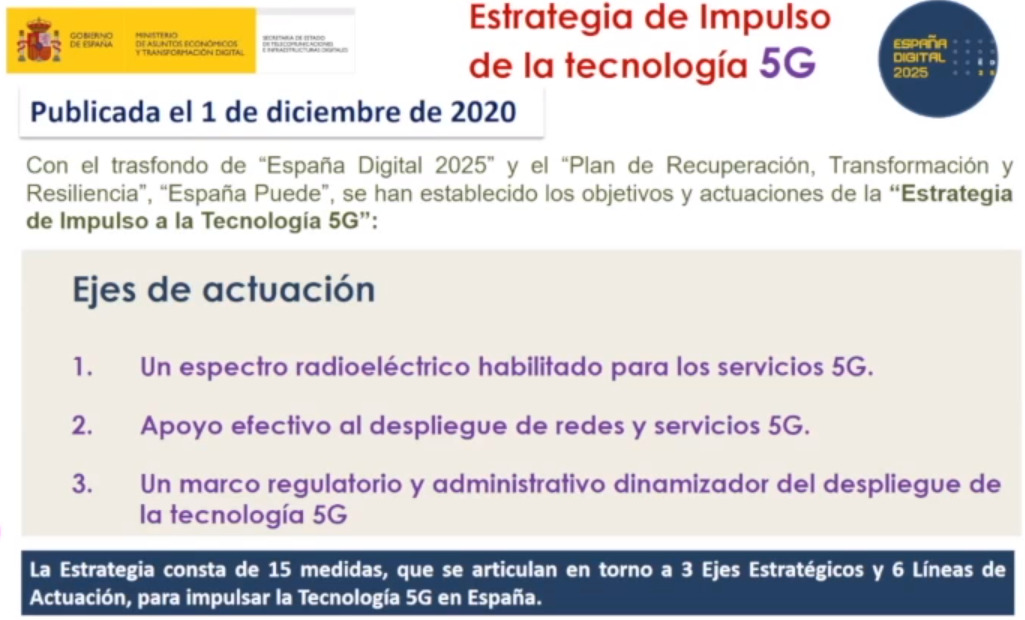 Economic development for other sectors

The Secretary of State also stressed “that we want to help us see 5G not only as part of the telecommunications industry but as an instrument for the economic development of many other sectors.” Measures to support the deployment of 5G networks will have to focus on this concept in even low-population areas to favor new services.

In an agricultural farm, Sánchez gave the example, based on population criteria, a 5G network would never be installed; Therefore, in those cases, it will help to promote agricultural transformation with the installation of 5G networks. The so-called “smart agriculture” is one of the most interesting use cases due to its high potential when it comes to getting more and better crops, with the use of sensors or drones, and also with the preservation of the environment, based on watering only when and where it is needed, and reduce the digital divide.

The Secretary of State finally addressed the need to have a regulatory and trust framework that encourages cybersecurity in 5G and anticipated that a 5G cybersecurity law will be sent to the Congress of Deputies for debate to ensure that this digital transformation is develop based on minimizing technological and non-technological risks.

Peter Stuckmann, head of the European Commission’s Future Connectivities Unit, hailed the coordinated commercial launch of 5G at the end of 2020 as a success, although he acknowledged that there is a delay in the allocation of frequencies in the European Union. Specifically, as of today, he specified, only 50% of the available frequencies have been assigned, which has led the European Commission to contact the most backward member states to continue developing this area.

The objective of the European Commission is that all transport routes and urban areas have 5G coverage by 2025, with the ultimate goal that all populated areas of the European Union will be covered with 5G by 2030. According to Stuckmann, it is trusted in the influence of European projects underway to achieve this, such as the cybersecurity “toolbox” or the Open RAN initiative, as well as the correct application of European recovery funds, which 20% of the total are destined to the digital field.

For Stuckmann, “Spain is one of the most advanced countries in Europe in the deployment and implementation of 5G and where more use cases are being carried out than when the new networks are fully developed exclusively with 5G technology, and not relying as now on 4G networks, will see its important fruits.

Narcís Cardona, director of the I-Team, of the Polytechnic University of Valencia, highlighted the “power of the millisecond” that 5G networks allow. In personal communications, a communication delay of a few milliseconds is not critical, because the human brain is capable of adapting. On the other hand, in machine-to-machine communications, no tolerance for failure or delay in communications is accepted, no matter how small. 5G networks, much more reliable, robust and practically instantaneous, will allow to extend and get much more out of communications between machines. We will also have full connectivity of mobile devices with wireless communications.

María Rúa Aguete, executive director of the Omdia consultancy, gave a global vision of 5G at the 5G Forum and stressed that “talking about 5G is talking about China”. The pandemic has accelerated digital transformation and 5G innovation around the world, but especially in China, where a great effort was made to keep the population connected. It happened in all countries, but in China the powerful 5G network they already had at the beginning of 2020 was used, despite the fact that the commercial deployment had been done only a few months ago, in October 2019.

Until March 2020, a strong push for 5G took place, especially in South Korea and Switzerland, followed after half a year of slowdown, until its recovery from September 2020. In March 2020, Rúa Aguete recalled, the implementation 5G in China was relatively moderate, below the United States and similar to the United Kingdom. A year later, China has fully taken the lead in the development of 5G in the world.

This year there will be more than 500 million 5G subscriptions and in 2022 the 1 billion, thanks to China, and by 2025 5G subscriptions are expected to be around 3.5 billion. 30% of mobile connections will be in 2025. The high aid and promotion that the Chinese government has made of 5G technology explain why China has taken the lead, both in subscriptions and in industrial applications by numerous Business. Many Chinese, however, have acquired 5G smartphones without having a subscription to the new network, attracted by the promotion. This means that the sales of 5G smartphones in China are much higher than the subscriptions, said the Omdia management.

The perception that end users and consumers have of 5G is that it provides much greater speed (75% in an Omdia-Netflix survey last April) and to a lesser extent a way to achieve greater coverage (41%) and access new and better applications (30%). 21% think that 5G is slightly faster, 20% a good reason to buy a high-end smartphone and 17% a new way to access broadband services (11% do not know or do not respond).

For consumers, therefore, 5G serves to access a higher mobile speed and only 20% think that it is a good reason to change smartphones, summarizes María Rúa, which leads him to think that operators should do “something more ”To boost 5G, how to integrate more interesting applications into their 5G plans. Games, and especially streaming video, represent for now the greatest opportunity for operators to attract new 5G users, followed by content on demand, according to an Omdia survey that will be released next month and which will be made a breakthrough.

In Spain, there is a very wide deployment of very high-speed infrastructures, with 66.5 million new-generation accesses, with the most extensive fiber network in Europe. At the moment there are 55.9 million accesses and with almost 14 million NGA accesses in service, recalled Antonio Fernández Panigua, deputy director general of Planning and Management of the Radioelectric Spectrum of the Ministry of Economic Affairs and Digital Transformation.

The 5G National Plan, published in December 2017, aims to place Spain among the most advanced countries in the development of this new network. When 5G reaches its technological and commercial maturity, Spain must be prepared to take full advantage of all opportunities, said the Deputy Director General.

Fernández Paniagua recalled that the frequency band from 3,400 to 3,800 MHz was tendered in July 2018 and last February it was completed with the 20 MHz that remained to be tendered. The process of reorganization of the 3.5 GHz band is now advanced so that the four operators have contiguous frequencies. This reassignment should be carried out shortly, without giving further details. 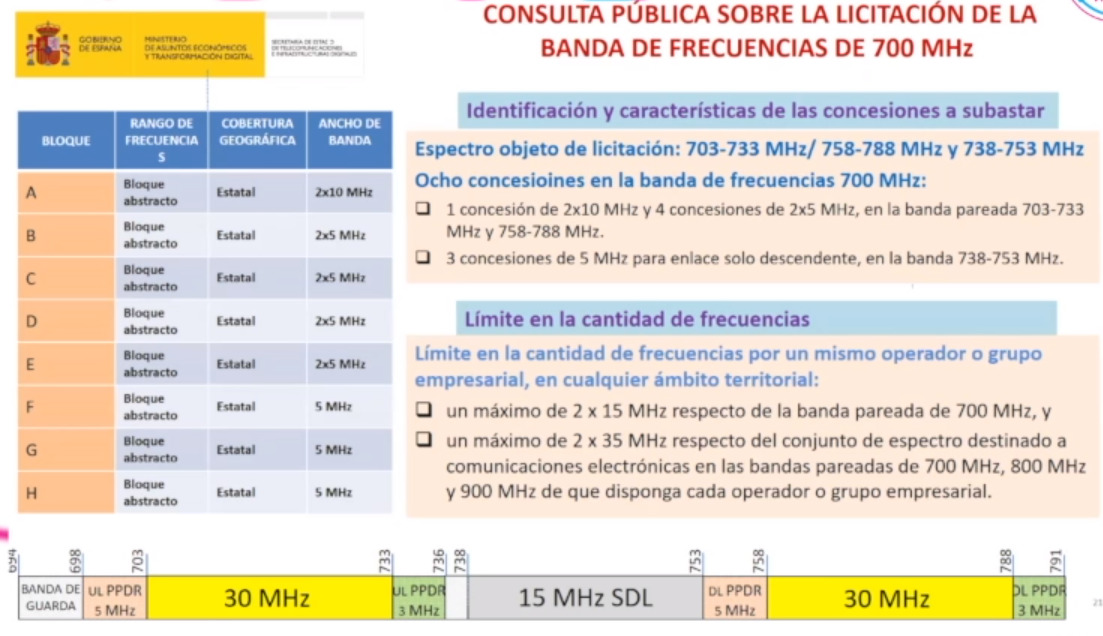 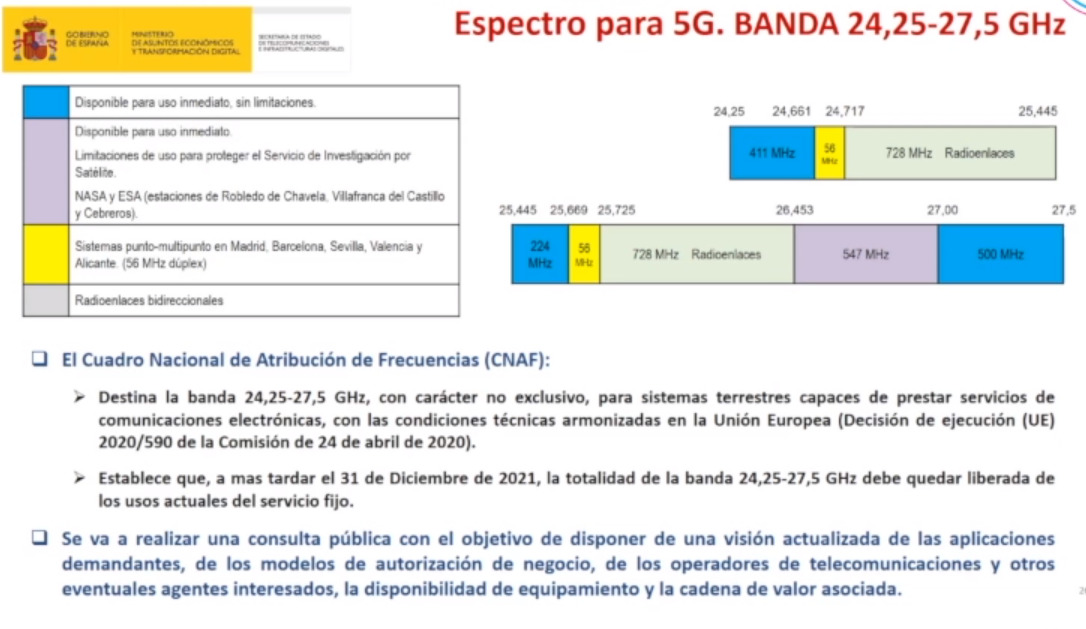 Regarding the tender for the 700 MHz band, the public consultation on the conditions has already been carried out and now we are waiting for the band to be tendered, which will be held shortly, predictably this month of May or the beginning of June, so that in the summer there could already be networks in service with this low frequency band. As for the band from 24.25 to 27.5 GHz, the current uses are in the process of being released and then a public consultation and subsequent bidding will take place, with no scheduled date announced.