Ericsson expects this year to end with a total of 220 million subscribers to 5G networks, of which 175 million will be in China compared to just six million throughout Europe, according to the Ericsson Mobility Report  just released. Around 1 billion people, 15% of the world’s population, will live in areas already covered by 5G networks, which does not mean that they are connected.

The unusual growth of Chinese subscribers to 5G networks during 2020 has broken all the forecasts that Ericsson had made in its mobility report a year ago and in the update of last June. In the 2019 report, Ericsson had calculated 100 million 5G subscribers in the world by the end of 2020 and last June raised it to almost double, 190 million, and yet it has still fallen short at 30 million.

For Ericsson, the factor that has contributed the most to China going from having 5 million 5G subscribers at the end of 2019 (it started the service in September) to 175 million twelve months later has been the drastic drop in the price of 5G smartphones. In China, a 5G smartphone of more than reasonable quality can be bought for several months for less than $ 300 to change, a price that is just now beginning to be seen in the West.

The other factor, of course, is the dizzying pace of 5G base station installation in China, with the associated high coverage, which allows the use of a 5G network and a 5G smartphone in cities and large areas of the country. The Ministry of Industry and Technology reported a couple of weeks ago that 700,000 5G base stations had been installed in China by mid-November, well above the half a million units initially planned, which was already outrageous.  This figure is more than double that of those installed outside of China according to Liu Liehong, Vice Minister of Industry. All in all, China estimates that they will need to install 10 million 5G base stations to have the entire territory well covered.

Ericsson’s bulky miscalculation of Chinese 5G subscribers this year does not detract, however, from the long list of consistent mobility reports the company has published for decades, especially the six-year forecasts. years seen. What is a bit surprising is that the forecasts that Ericsson had made for the medium term had historically been a bit short when now it is the opposite, they are optimistic. For example, in its 2019 report, Ericsson estimated a total of 8.9 billion subscribers by 2025 and in this year’s report it is estimated that there will be 8.8 billion subscribers by one year later, 2026.

Ericsson now projects that the peak of LTE-4G network subscriptions will be reached in 2021, with 4.8 billion subscriptions and then it will decline to 3.9 billion LTE-4G subscribers by the end of 2026. There will still be about 400 by then. million more LTE-4G subscribers than 5G, according to Ericsson’s forecast, to probably catch up by the following year. As has already happened with the other mobile generations, the takeoff of the new generation is much faster than the previous one and with 5G the same thing happens. The graph expresses this growing evolution of 5G. 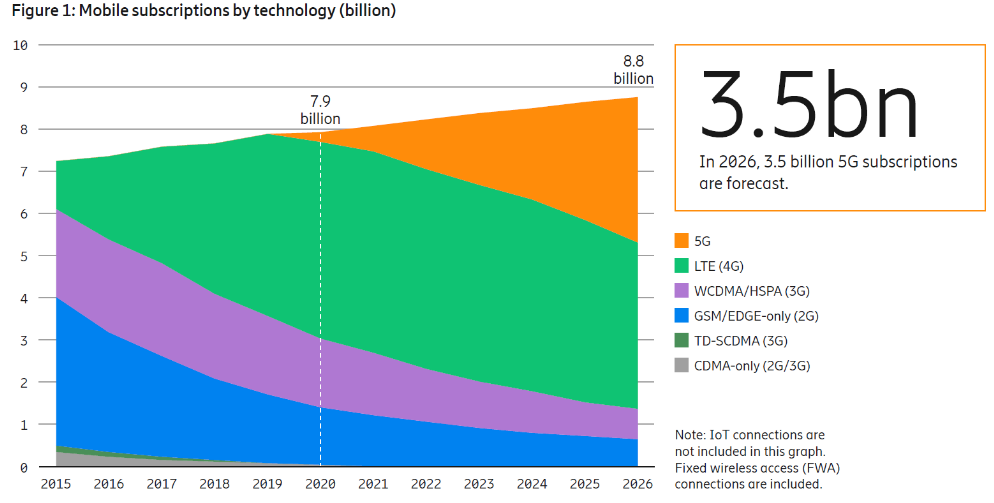 And it is that each time it is closer to the saturation of mobile users. In recent years, the massive influx of mobile users in India and Southeast Asia fueled the high growth, but it doesn’t go much further. In addition, most operators have proceeded to withdraw and cancel unused SIM cards and provide contract cards, albeit with a modest fee. All of this has helped to clarify the market and it shows in the total figures, with the vast majority of users actually active.

The smartphone, therefore, will continue to be the mobile device par excellence for the foreseeable future. Subscriptions to fixed broadband (FWA) will grow at a healthy rate of 4% annually until 2026, but it is still limited growth (currently around 1 billion). The same will happen with mobile subscriptions to tablets and laptops: their growth will be moderate in the coming years, reaching 450 million subscriptions by the end of 2026 (about 5% of the total). The following table shows the growing pace of mobile broadband and smartphone subscriptions versus the slow growth of fixed broadband, traditional mobiles, and tablets and laptops. 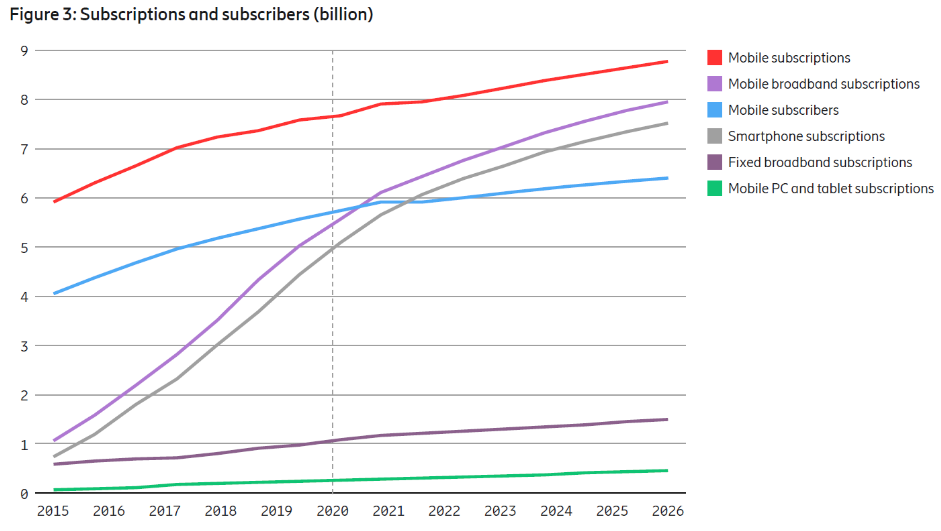 “2020 will likely be known as the year when society as a whole has taken a giant leap forward on our journey towards digitization. The cornerstone of this change is the fundamental need for good connectivity, as clearly shown by the continued growth in capacity and coverage of mobile networks, ”says the Ericsson report.

“5G is no longer just a novelty, it is entering a new phase, when many new devices and end-user applications will provide the most technological benefits and operators around the world will continue to build 5G networks,” he adds. The report estimates that 5G networks will cover 60% of the world’s population in 2026. “As society changes rapidly, it is clear that mobile networks are the critical infrastructure that will continue to support many aspects of daily life,” he adds.

5G coverage will grow at a very good pace over the next six years and will be the majority in North America, Western Europe and Northeast Asia, which includes China, Japan and South Korea. Now, it is in Northeast Asia where there is more 5G coverage, with 9% on average, while in North America it is at 4% and in Western Europe it does not reach 2%, but the situation will change by the end of 2026, as indicates the bottom graph from the Ericsson report: 80% of North America will be covered with 5G, Western Europe with 68% and Northeast Asia at close range, 66%. The rest of Europe and Southeast Asia will have 5G coverage close to a third while India and Latin America will be close to a quarter. In all these countries, the vast majority of the rest of the territories will be covered with 4G.

Data traffic through mobile networks will continue to rise dramatically, although it will also continue to rise through fixed networks. Between the third quarter of last year and this third quarter, mobile data traffic has grown by no less than 50%. And this, despite the pandemic, which has meant that mobile phones were used relatively less compared to fixed networks as many people were confined to their homes.

In the next six years, the highest growth in global data traffic will be led by 5G networks, to the point that in 2026 it is estimated that 5G networks will carry 54% of total mobile data, as seen in the graph above. Global mobile data traffic is estimated to be 51 exabytes per month by the end of 2020 and Ericsson projects it will multiply by 4.5 times by the end of 2026, at 226 exabytes per month.

The challenge facing 5G networks is not so much to support this anticipated traffic growth but to increase the use of 5G business applications. Through 2021, use cases are expected to mature now in a trial period and numerous private networks to go live. In the Ericsson report there is also a section on the need to interconnect global supply chains more, and the benefits that 5G can provide, as well as new consumer applications, such as online games or augmented reality in large gatherings, where 5G can also play a dynamic role.